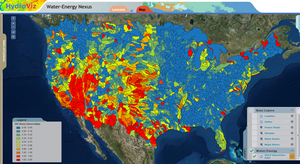 Water and energy are strongly interrelated and the links between the two systems are expected to intensify further in the future. The energy sector withdraws more water than any other sector in the United States, mainly for power generation. Similarly, the water sector relies heavily on energy for water supply and water treatment (including desalinization). The interdependency between energy and water is referred to as Energy-Water (EW) Nexus. The intent of this module is to introduce students to Energy-Water Nexus and analyze stresses on water system under different scenarios of current and future energy demands, including factors such as fuel type, cooling technologies, greenhouse regulations, and population growth. The analysis is done at the scale of eight-digit watershed hydrologic unit code (HUC8).

Flash flooding is a hazard in many parts of the world. In the Rocky Mountains, flash flooding is common in mountain canyons, desert washes, and other such topographic areas featuring mountainous terrain where runoff from rainfall quickly accumulates in gullies or ravines. With a growing population, developing neighborhoods in terrains susceptible to flash floods have become more common and have therefore increased the potential for damage to private property and public infrastructure. In this module, you will learn about the topics in hydrology needed to design a detention basin to protect an area of urban development from flooding.

Climate Teleconnections, with an application in the Everglades

Climate variability and the influence of remote oceanic and atmospheric conditions on regional precipitation and temperature are important concepts for understanding how local water balance evolves over long periods of time, and also how extreme hydrologic events may result from climate patterns that are organized at global scales. Through this module, students investigate relationship between climate indices and regional hydrological conditions, with an application in south Florida, and consider how climate teleconnections can be leveraged in improving seasonal and decadal water management in these locations.

Water budget analysis of large coastal basins provide a basis for understanding the hydrologic and ecologic processes of the ecosystem, its ecological functions and services, and predicting effects of natural and human hydrologic alterations. In this module, you will use the output of a spatially-distributed mass-balance model to perform a water budget analysis for the Louisiana Chenier Plain ecosystem. In this analysis, you will examine budget variability at inter- and intra-annual scales.

Bioengineered oyster barrier reefs are used as a viable restoration technique that can improve oyster propagation and serve as breakwaters to attenuate wave energies. The 2012 Louisiana Coastal Master Plan list of proposed projects includes one such reef located between West and East Cote Blanche Bays, to the east of Vermilion Bay. This analysis will determine the hydrologic impact of the proposed oyster reef project on the region and if the addition of an oyster reef will be to the benefit or detriment of one of the many commercially valuable aquatic species found in the bays under analysis.

Wetlands in Louisiana’s Chenier Plain are undergoing persistent deterioration that will become increasingly problematic if not adequately addressed. While the cause of the problem is sometimes apparent the solution is not always as straightforward. Many restoration plans are proposed and their acceptance depends on many factors the first and foremost of which is the feasibility of the proposed project. This module examines a proposed restoration project aimed at reducing salinity levels in a coastal marsh area by increasing the introduction of freshwater to the area. To assess the feasibility of the project a lumped box model is constructed in which meteorological fluxes and flow exchanges through local control are considered and quantified. 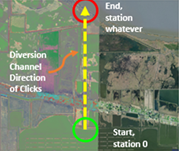 Sustained saltwater intrusion is one of the leading causes of marsh fragility and land loss in coastal Louisiana. A solution to mitigate salt water intrusion is freshwater introduction projects. The application of this type of restoration project usually involves the dredging or excavation of a new or existing channel to accommodate the additional freshwater flow. This module concentrates on constructing and utilizing a one-dimensional unsteady flow model to assist in the hydraulic design of a proposed conveyance channel. This module is based on an actual restoration project that was proposed is South Pecan Island located in Coastal Louisiana.

A large portion of the hydrologic studies conducted in coastal Louisiana focus on the protection and restoration of the numerous habitats which reside in it. These habitats are highly dependent on both the water and salinity level of the marsh type ecosystem in which they reside. In this module, you will build a basic understanding of the relationship between hydrologic regime and vegetation type in a coastal wetland area by interpreting hydro-ecological field observations and analyse hydrologic indices to assess marsh health and productivity.

© 2015 University of Louisiana at Lafayette. All rights reserved.
For any additional information, contact: info@hydroviz.org